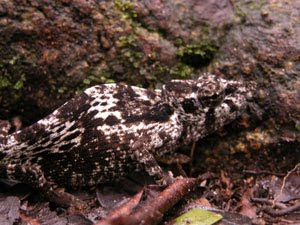 A new species of chameleon discovered in Tanzania has been identified and named by a team of life science experts including Anglia Ruskin University Research Fellow Trevor Jones.

Conservation zoologist Trevor was the first to photograph the newly-named ‘Magombera’ chameleon when he spotted it walking on the inside of his tent.

He was camped in the Mwanihana forest, in the Udzungwa Mountains of south-central Tanzania, studying endangered monkeys, and knew that there was no species of its kind reported from that site.

One year later, Dr Andrew Marshall, from the University of York, also spotted the reptile while surveying monkeys in another forest, the Magombera Forest, when he disturbed a tree snake eating one. The specimen was collected and tested and compared to others found in East Africa.

The study that followed included Dr Marshall and researchers from the Meseo Tridentino di Scienze Naturali, the South African National Biodiversity Institute, Anglia Ruskin University and the University of Stellenbosch.

Anglia Ruskin University’s Faculty of Science & Technology’s life sciences team has also been instrumental in the discovery of a new species of monkey and elephant-shrew, both in Tanzania.

The chameleon has been named Kinyongia magomberae (the Magombera chameleon). It was named after the second forest it was discovered in, to highlight this unprotected and highly threatened site. It is hoped that the naming of the chameleon will help to convince the government to give further protection to the area.

The Magombera discovery brings the total of known chameleon species to 161. Chameleons are a specialised group of lizards that often have the ability to change colours and are known for their dinosaur-like heads and parrot-like feet. The new species is most easily distinguished from its closest relatives by a very small and immobile horn-like appendage on the end of its nose.

Trevor Jones is a conservation zoologist who has worked on a wide range of mammals and birds in East Africa and Europe. Since 2002, he has carried out ecological research, monitoring and training in the biodiverse forests of the Udzungwa Mountains, Tanzania.

From 2002-2004, he habituated a group of endemic Sanje mangabeys, and completed the first systematic study of their ecology and behaviour. In 2004, during an exhibition searching for unconfirmed populations of mangabeys, he instead discovered one of the two known populations of ‘kipunji’, Africa’s first new monkey species for 20 years.