The finding of 395-million-year-old footprints in Poland turns back the clock on the evolution of four-legged creatures. 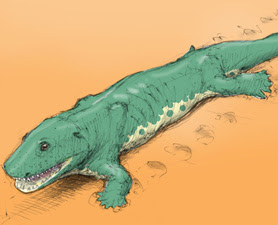 This is a sketch of a Devonian tetrapod making tracks. It is based on a species from the Late Devonian of Greenland but is a reasonable approximation to the track-maker of newly-found prints in Poland.
Per Ahlberg
The world's first four-limbed animals, called tetrapods, crawled on land much earlier than scientists thought, judging by tracks left behind by some of the animals in a prehistoric Polish lagoon.

The fossilized footprints from these animals are 18 million years older than the earliest tetrapod body fossils, pushing the emergence of four-limbed creatures back to at least the early Middle Devonian period, according to two papers published in the latest issue of the journal Nature.

Tracks left behind by the animals 397 million years ago show how they walked on their short, thick legs through the mud of what was once a coral reef lagoon. That type of location, with its regular tides and abundant food sources consisting of "washed-up dead animals," likely set the stage for the fish-to-land animal transition, according to the authors.

The crawlers have not yet been identified, but co-author Per Ahlberg told Discovery News that they were "basal tetrapods, the common ancestral stock of all the living tetrapod groups."

Dogs, cats, humans and any other animal with four limbs fall into that large overall group.

But there was something fishy about these early animals.

"There isn't anything living today with the strange combination of fish and tetrapod-like characteristics that we see in the earliest fossil tetrapods," said Ahlberg, an Uppsala University Professor of Evolutionary Organismal Biology.

Ahlberg and his colleagues found and studied the tracks at what is now the Zachelmie Quarry in southeastern Poland. Their analysis shows some of the animals appear to have moved in a straight line without dragging their bodies on the ground, while others had a less symmetrical gait.

The largest of the individual prints shows not just feet, but the animal's "whole limb as far as the knee," the researchers wrote. On one fossil track, "the tip of each triangular toe shows a small distinct cushion or pad," they added.

Before the discovery of these tracks, it was thought certain fish evolved into four-limbed animals during the Givetian Period, 391 to 385 million years ago. Fossils seemed to neatly support this timing for the fin-to-limb gradual change, since some fish, known as elpistostegids, appeared to belong to a mid-point stage where the fish had tetrapod-like heads and bodies, but retained fish characteristics, such as paired fins.

"In fact, tetrapods and elpistostegids coexisted for at least 10 million years," the researchers point out. "This implies that the elpistostegid morphology was not a brief transitional stage, but a stable adaptive position in its own right."

The scientists compare the coexistence of four-limbed animals and these fish with what happened to dinosaurs and birds. Dinosaurs didn't all just evolve into birds. Feathered and winged theropod dinosaurs were still around long after the first birds appeared about 150 million years ago.

Another revision to the animal history books concerns the habitat of the first tetrapods, according to Philippe Janvier and Gael Clement of the National Museum of Natural History in Paris.

In a separate commentary in Nature, they call the new finds a "stunning discovery." They write that the sea and lagoon location described by Ahlberg and his colleagues "is at odds with the long-held view that river deltas and lakes were the necessary environments for the transition from water to land during vertebrate evolution."

Given this difference, and the very early date of the tracks, Janvier and Clement believe the new findings "lob a grenade" into accepted theories of the fish-to-tetrapod transition.