Footprints fuel rumours of the beast of Workington's Borough Park

Could these paw prints in the snow be the proof there is a beast of Borough Park who prowls near the pitch at Workington Reds’ football ground? 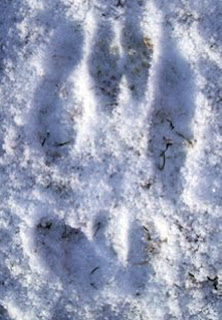 The mysterious tracks, almost the size of an adult human hand, have been discovered at the sports stadium, supporting previous sightings of a huge black cat-like creature.

Groundsman Jeff Curwen and Reds fan Peter Bratley discovered the mysterious prints in the snow when they were first to arrive at the ground this week.

Jeff said: “I can tell tracks by now. There was a fox there as well because his prints are neat and all in line and there were also marks and tracks from rabbits and birds.

“But these prints were different. They certainly made Peter and I look around for more.

“They didn’t seem to be on the pitch, funnily enough, but round the tunnel side and behind the Derwent end goals.”

Jeff has an inkling of what might have been responsible as two years ago he had a nerve-jangling moment while working on the ground.

“I was working on my own over by the popular side when I noticed something move behind the seats on the terracing,” he added.

“It walked behind the seats and I could see its tail and the top of a head.

“It was a big, black cat-like creature and when it seemed to see me it turned to its right and got away out through the entrance at the back and apparently over into Lonsdale Park.

“I told a few people what I had seen but nobody seemed to believe me.

“There has got to be some connection with that creature and the prints. You could see the claw marks at the end of the prints.”

There have been several sightings in Cumbria over the years of large, black cat-like creatures.

The British Big Cats Society say that the non-native creatures are stalking Britain and their numbers could be on the rise.