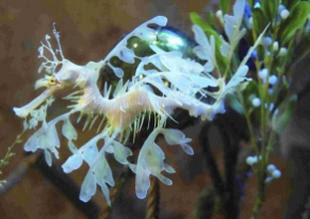 MISTLETOE has tricked leafy seadragon creatures at the Sea Life Park in Weymouth into a mating frenzy after they confused the Christmas plant for a love-rival.

The odd-looking marine creatures bear a striking resemblance to the Christmas kissing plant.

So when the males were a little slow in getting to know the female seadragons at an aquarium, staff decided to decorate their tank with sprigs of mistletoe.

And it had the desired effect as it apparently sparked jealousy in the male seadragons who now see the plant as a love rival.

Fiona Smith, display supervisor at the Sea Life Park, said: “The males have suddenly started engaging in heated courtship with the females.

“It seems the males view the Christmas decorations as potential rivals and they are making sure they don’t lose out.

“We knew the seadragons looked like mistletoe and at first we decorated the tank as a bit of fun but it has had the desired effect.

“It looks like mistletoe can fire underwater passions so we may keep it in the tank year round.

”The Sea Life Park hopes to be the first place in Europe to breed the animals that are usually found around Australia.

The attraction has only recently taken delivery of the creatures, but were not encouraged with their initial lack of courtship.

Seadragons – phycodurus eques in Latin – are close relatives of seahorses and like them, it is the male that looks after the eggs by carrying them in a clump on his belly.

The Sea Life Park is one of the world’s most successful seahorse breeding facilities and its marine experts hope their expertise will guide them to similar success with the seadragons.