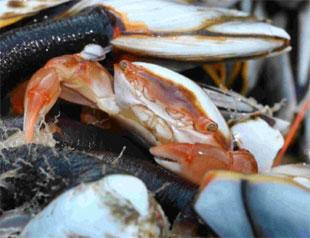 WILD and windy weather has washed up some rare and unusual visitors to Dorset’s beaches.

Tropical crabs, birds blown off course and rare barnacles are among the wildlife reported by Dorset Wildlife Trust after storms and strong south-westerlies.

Six rare types of goose barnacle have reached the coast in recent weeks, including one, Conchoderma virgatum, which trust staff have nicknamed the “pyjama barnacle” because of its stripy skin.

“These animals usually spend their lives in warmer waters, drifting around the oceans of the world, hitching a lift on any floating debris, whether it be mats of seaweed, bird feathers or plastic bottles,” said Julie Hatcher, marine officer.

Very rarely, other oceanic hitch-hikers find their way to the coastline, including a tropical Columbus crab, found by local marine expert Lin Baldock on Ringstead beach.

This is only the second time in 100 years that Columbus crabs have been found here. They hit the headlines in 2006 when around 30 were discovered on the beaches, following extremely stormy conditions.

Among birds driven by the storms was a grey phalarope, a wading bird blown off course as it headed for the southern oceans from its Arctic breeding grounds.

It was seen surfing the waves and picking tiny bugs from the water just below the trust’s Fine Foundation Marine Centre, at Kimmeridge.

Birds including puffins and petrels, that are normally far out to sea at this time of year, have been washed up dead, battered by the wind and waves and unable to feed.

“Now is the time to get out on the beach and search among the strandline,” said Julie. “After such a stormy period you never know what creatures you may turn up, and it may even be something never recorded in Dorset before.

“Take photos and send them to Dorset Wildlife Trust for recording. The more we know about what’s out there, the better we will be able to protect it,” she said.

(Submitted by Mark North)
Posted by Gavin Lloyd Wilson at 10:55