Christmas lights? No, it’s the wagtail tree: Hundreds of roosting birds cover every twig and branch

Going back to Jon's posting a few days ago about the pied wagtails outside Tesco in Barnstaple, here is another sighting of a wagtail roost over the festive season - this time in Tunbridge Wells, Kent.

With most town centres currently festooned with fairy lights, you might not give this tree a second glance.

But take a closer look and you'll realise that it's not been decorated but is in fact alive with little birds.
The long-tailed black and white bird is usually seen on its own, flitting through the sky in search of insects. Its other common trait is to stand on the ground frantically wagging its tail up and down – hence the name.


But when dusk falls, they gather in large numbers.

This flock was spotted by photographer David Tipling among the decorations in Tunbridge Wells. 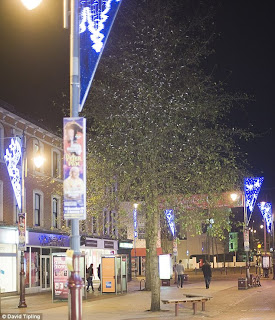 He said: 'At first I thought they were lights that weren't working. People were walking underneath oblivious.

‘It has been so cold recently that perhaps they find it warmer roosting in the middle of town rather than out in the countryside. 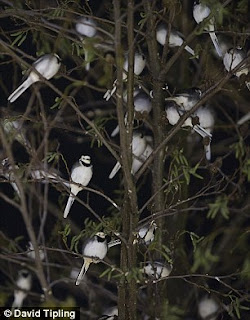 'They did look a little spooky, all of them gathered there together.'

Dr Nigel Collar, from conservation group BirdLife International, said: 'There are two theories as to why so many wagtails roost together. The first is information exchange – they're all sizing each other up to see who's put on weight, lost weight and where the best food is to be found.

'The second is that it helps protect them from nocturnal predators as the larger numbers mean there's always one bird with his eyes open.'

The birds can be found across most of the UK, and leave some of the highland and northern areas of Scotland in winter.

They are a sub-species of the White wagtail, which breeds in much of Europe, Asia and north Africa.