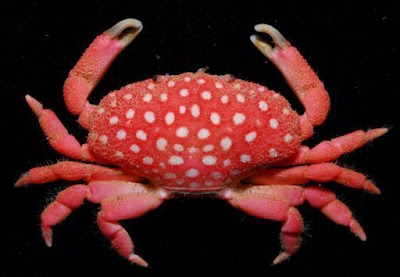 TAIPEI — A Taiwanese marine biologist said Tuesday he had found a new species of crab which is coloured like a polka-dotted strawberry.

Professor Ho Ping-ho of National Taiwan Ocean University said he made the discovery while carrying out research on the environmental impact from a shipwreck last year on the beaches of southern Kenting National Park.

"One was dead while the other was dying when they were found on a beach of Chialoshui," Ho told AFP, referring to a scenic coastal village in the national park.

The two female crabs, with the bigger one measuring 2.5 centimetres (one inch) in size, have been made into specimens.

"Luckily the oil leak from the shipwreck was not serious, otherwise the two crabs might have been polluted and escaped our eyes," Ho said.

The professor said he was writing an essay on the new species.